My seven year old was crying when I picked her up from school.

She said she had fallen asleep in class and had been crying a lot as she was so tired. I asked her why didn’t she ask to be sent home? She was too tired to get any sense out of her. But essentially none of the teachers were actually paying attention enough to feel the heat radiating from her little body.

I got her home and she asked if we could snuggle on the sofa, and as I sat with her it was obvious she was burning up! Her cheeks were now really flushed and her eyes dilated. I stripped her down to a vest and pants, and put a light sheet over her, as she was complaining she was really cold.

Then I went in search of the thermometer. 39.9C. Great. So, made some hot apple, ginger and honey, got her to drink. Gave some aconite 30C. Sat her up against all protest to check her and adjust her. Then let her sleep in my lap. Over the next few hours her temp was markedly unstable. Her head hurt, and she cried.  I looked down her throat, which she said didn’t hurt, but it was badly ulcerated with huge white patches and raised ulcers, and a quinsy to the left side. The head pain was terrible at times. Then she slept again for an hour. Temperature still bouncing 38.6-39.9C.

But so far, she was herself, asking for drinks and eating little bits of fruit. All good signs her body was managing well.

Now my kids have always burned high and fast and super hot at 40C at the best of times. I am good with steady. But a good steady burn is not the same as an unstable temperature that fluctuates; they mean different things.

So I was worried. Add increasing pressure and head pain into that picture, and I was starting to stress.  And, as usual, I was alone.  Year eight of single parenting this month actually. Since she was 6 weeks old in my belly.  These are the things that can make it scary and tough. Being alone with your child expressing a fully functioning immune system (which most would call being sick and poorly), and no one to talk to or reassure YOU! As you reassure your child that all is going to be ok, her body knows what to do, it is really strong! It is really smart! While you check off the list of baddies and fears in your head.

Then she began to not be so ok. Her head hurt so much in sharp doses of pain she started to cry, and she curled up into a ball and wouldn’t straighten out. Then I got her into a lukewarm bath. She felt too wobbly to walk and all of her joints hurt. And her head, her poor little head. I also made her gargle with a dilute batch of oregano tea to kill off the quinsy (which it did).

I kept reassuring her that her body knew what to do, that she was rocking this, even if it felt bad.  Her body was fighting whatever had managed to get the better of her, and it was really, like seriously, really smart.

After all, the body is a self healing and self regulating system, isn’t it? Well, yes it is. And what it needed was support, and lots of it.

Now having the chiropractic education in general diagnosis and pathology, as well as two years of masters level paediatric training can be a good and a bad thing at the same time! I have the whole terror list in my head of what to worry about.

I got her into bed, dosed her up with pulsatilla 30C (as her ear drums were bulging and her whole head was full of lymph) then did a cranial adjustment and lymph drainage to ease the head pain and drain the fluid out of the lymph were it was so congested. She relaxed and slept, and deeply then.

I got online to ask for support and guidance from the outer tribe.

I posted to the Arnica UK group to see if any homeopaths were online that could offer advice as ours is away and the hotline was not being answered (this is 10pm).

Then I got on the phone, outside, so no one could hear me speak, and rang a good friend to talk it through. Should I get a painkiller? We have never had them in the house. Neither child has had any medication, even when they had each broken limbs, they self managed between ice and arnica doses, and once set in the cast, were no longer in any pain. (bloody amazing in my books, when I broke my elbow I was like gimme the morphine!!!) So I was really unsure of what to do!  Pharmaceuticals is a new game, and a scary one due to the side effects longer-than-my-life-long! So, while I expressed my fears and chatted through it all, it was clear that my worry with the head and neck pain issues are every parents feared dread- meningitis. But as we spoke, the symptoms didn’t fit. It was clear the pain was coming from the throat and lymph congestion. It was so reassuring to be able to speak and be real and vulnerable and feel so supported on the natural pathway– even if I might need further help in a medical realm.

If things had turned for the worse, and my red light went off in the intuition mama bear world interior, I would have had to take her to our local hospital. I am not a medical doctor, and a good diagnosis is often key to choosing the right approach. Sad to say, this is the most unsupportive environment for families who are naturally based. We may go there for support when our children may need a diagnosis or more help past the limitations of matter than their little bodies can manage at the time, and end up getting lectured over things that do not matter and often have nothing to do with why we are there in the first place.  (ie. We got basted for our kids not being vaccinated when the first broke her wrist—a closed fracture no skin pierced-as she could apparently get tetanus! REALLY? Idiocy and unsubstantiated nonsense at its best. So instead of a place to go for help, it is a place to go prepared armed for battle, which is quite sad. While I have enormous respect for their education and dedication, there is such a lack of respect in general, and it creates an unnecessary divide. Integrated approaches help everyone involved, especially the patient! Having a child vaccinated is not going to stop them from getting tonsillitis. Implying so or saying so directly is just crazy talk.

So after speaking to my friend, I brought my ten year old down to keep an eye on the seven year old. I made sure she had my mobile by the phone if she was scared, then left the girls for a moment to get some stuff at the shop anyway, so that if things did get worse pain wise, she could have relief if she needed it. One stress out of the way. I am fortunate that the shop is literally at the end of my garden, as a car journey would have been out of the question.

The thing is with young kids, is that when they begin to fight something, the symptoms go mad from zero to infinite in minutes.  And you do need to make sense of a whole picture as it builds in front of you in order to not over react and get into freak out mode. And it is so not easy!

So, a long night, lots of adjustments, cranial work, lymph draining, then sleep. Belladonna 30C as well as water (my lovely homeopath Lulu Badger did get back to me despite the time change and being away!)

At 5 am the temperature was down to 37.6C, then as the sun rose at 8am it was down to 37.1C. And she was tired, so tired, but back to her happy self, chatting away, wanting a dippy egg and toast. And chocolate (of course lol). WHEW. 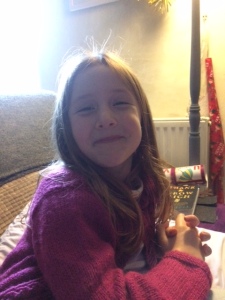 So, in the end, all’s well that ends well. Now more rest is in order, along with continued supportive care.

But I missed it. I wasn’t paying attention. I hadn’t been present that morning whilst trying to organise for builders to arrive. I had not been SEEING her. Had I been, I would have kept her home Monday, and had a full rest day, which would have headed all of these painful expressions of immune function off. How can I know that? Well, in the last five years I have not had a day off due to a poorly child. If one is run down and tired, and their behaviour is shifting, I know that they are already fighting something. THAT is when I keep them home, extra nurture and rest. Or they come to work with me and hang out and relax.  Mental and emotional health time off rest. The pre-something is coming rest. This is not beating myself up, it is just another reminder to be present. Really present.

So, here I sit at home, thankful Rachel is covering for me at work, and that I can be here to let her rest, snuggle, recover to full strength.  And laugh her head off at Ghostbusters.

Very grateful for the universe knowing I still don’t have it all figured out, and that I CAN ASK FOR HELP! And have it received many times over. A good reminder that while I have skills many do not, I am still a mama, and like every mama, I worry and have the same fears.

Thanks everyone for being there for us last night.

Much love and much good health!

ps terribly remiss of me not to mention Des and Clare, thanks a million for looking after our fur baby for us and getting her to the beach and for a walk!!

(Hols and Sadie on a summer day!)

At the UCA spring conference last weekend, I had the pleasure of meeting and listening to Dr Brett Hill, one of the Wellness Couch docs.  Having recently written and published his first book, How to Eat An Elephant (http://www.amazon.co.uk/How-Eat-Elephant-solutions-lifelong-ebook/dp/B007JK5F7C/ref=sr_1_2?s=books&ie=UTF8&qid=1395607833&sr=1-2&keywords=how+to+eat+an+elephant), he has also been heavily involved in the downloadable and very listenable series of podcasts about health and wellness with his two colleagues Laurence Tham, Damian Kristof, and Marcus Pearce.  Have a listen, you won’t be disappointed!

‘The Wellness Guys’ Show are a fun filled half hour of education, information and inspiration from three of Australia’s top wellness experts sharing their unique knowledge on the why, the what and the how of acheiving ultimate health and wellness.’